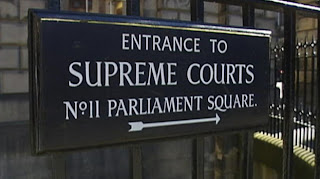 As previously reported, Lord Bannatyne sitting in the Court of Session, issued his opinion this morning in the Judicial review Petition of Carol Fox & Partners -v- HM Government & ors.

The Petitioners were seeking a judicial review of the introduction of fees for the employment tribunal system.  The Court had been asked yesterday, following arguments, to make an order know as an "interim interdict" (temporary injunction) preventing the the Minister introducing the legal Order establishing the fees.

Interim interdict was refused, but the Lord Chancellor was forced to provide an undertaking that fees would be repaid if the proposed feeing system was ultimately found to be unlawful.

The Petitioners had established a prima facie case, allowing the Petition to proceed, and a full hearing will now take place at some point after the summer recess.

The Petitioners were awarded their expenses because the Court believed the Respondents had wasted unnecessary time.

During the course of the two day hearing, Counsel for the Respondents (Representing the Lord Chancellor and the UK Government) conceded to the Court that they needed more time to answer the arguments placed before the Court by the Petitioners - particularly concerning the body of opinion that certain people will be either be disadvantaged or discriminated against.

The Court had also asked various questions of the Respondents concerning the statistical basis for claims in the Employment Tribunal and of the analysis given by the Government that there would be no prejudice to claims being presented.

The Respondents were not in a position to provide the answers sought.

Other arguments placed before the Court included identified problems with the proposed feeing structure, particularly where there are multiple claimants, for example in Equal Pay cases and the potential operation of a the 3 month time bar if a Claimant submitted a claim initially under a wrong heading only to be told later - when they sought to adjust or re-submit - that the claim is now time barred.

A lengthly comparison with the feeing structure in the Sheriff Court took place on the legal principle of "Equivalence".  This is where a remedy relating to a measure of European Law (concerning the various non discrimination provisions found in employment law) should not be more difficult, or in this case, more expensive, to obtain than an equivalent domestic civil court remedy.

It was agreed by both parties that more time was now necessary, largely because the Respondents (i.e the UK Government) could not provide enough information or answers to the case being made.  However, the Petitioners remained adamant that an interim order was necessary.

The Opinion of the Court

He first addressed the question of the "prima facie" case - which the Petitioners had to make in order to satisfy the Court that it should consider making an interim order and that the Petition for Judicial Review should proceed.

Here he highlighted that in his opinion, the Petitioners, a law firm, did have sufficient standing in order to bring the Petition and that the other potential tests, such as having sufficient interest, acting in the public interest / for the public good and having a direct effect on the Petitioner's interests were also satisfied.

Secondly, he turned to the question of the "balance of convenience".  This is the legal test applied by the Court to determine if the order sought is necessary having weighed up the arguments for and against on both sides.

The Court considered the costs to the UK Government - and ultimately the tax payer - of maintaining the employment tribunal system, the costs associated with the investment made by the Government to introduce a feeing system or staffing time, administration and so on.

This was balanced against the access to justice arguments, in the need to ensure that no potential claimant would be put off presenting a claim or continuing with their claim on grounds of potential fees.    No mention was made of indirect discrimination arguments here.

In assessing the balance of Convenience, the Court also considered the Undertaking made by the Lord Chancellor, that if ultimately fees were found to be unlawful, that the fees would be returned to the claimants.  This was compared against the undertaking that the Petitioners would have liked to have seen, namely that no fees would be paid up front at all and instead, claimants would be given a form of I.O.U. which would fall to be paid if fees were determined lawful.

In refusing interim interdict, the Court found that the Balance of Convenience favoured the Respondents because really the undertaking given and the undertaking being sought were the same - only mirrored.

The Petitioners were awarded costs however, because the Court considered that the Respondents had wasted their time and the Court's time by first claiming that they were fully prepared and subsequently admitting that they were not.

Opinion to be Published

The Court also agreed to publish its opinion, which should be available on the Scottish Courts Service website and suggested that publicity be given the undertaking provided by the Lord Chancellor to refund any fees pending the outcome of litigation.

Posted by Daniel Donaldson at 12:06